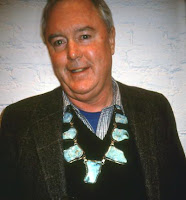 Dan Flavin (1933 – 1996) was born in Jamaica, New York. He studied for the priesthood for a time. During military service in 1954 - 1955 Flavin studied art through the University of Maryland Extension Program in Korea. On his return to New York in 1956 he briefly attended the Hans Hofmann School of Fine Arts and studied art history at the New School for Social Research. In 1959, he took drawing and painting classes at Columbia University, the year he began to make assemblages and collages in addition to painting. Flavin’s early paintings reflect the influence of Abstract Expressionism. His first solo show of constructions and watercolours was held at the Judson Gallery, New York, in 1961.
In the summer of 1961 while working as a guard at the American Museum of Natural History in New York, Flavin started to make sketches for sculptures in which electric lights were incorporated. Late in that year, he made his first light sculptures - he called these ‘icons’. In 1963 he began to work with coloured fluorescent tubes. His sculpture was shown in a solo exhibition, some light, at the Kaymar Gallery, New York, in 1964. In 1967 Flavin was a guest instructor of design at the University of North Carolina in Greensboro. By 1968 he had developed his sculpture into room-size environments of light and in the same year he outlined an entire gallery in ultraviolet light at Documenta in Kassel. A retrospective of Flavin’s work was organised by the National Gallery of Canada, Ottawa in 1969 - the exhibition travelled to the Jewish Museum in New York in 1970. Among Flavin’s numerous exhibitions in Europe were solo shows in Cologne in 1974 and Basel in 1975. He executed many commissions, including the lighting of several tracks at Grand Central Station in New York in 1976. Flavin died in New York in 1996.